We do it all the time. Right now, as you read this text, you are doing it. Or your body is doing it without you thinking about it. Actually it initially feels a bit awkward if you think about it. And dizzying. Almost 20,000 times a day! Humans are mammals, and our autonomic nervous system makes sure that when resting we breathe 8-12 times a minute. The better you are at binding oxygen, and the better you are at absorbing oxygen from your blood, the less frequently you need to draw breath. People who do a lot of yoga where they work consciously with breathing can bring that down to 5-8 times a minute. I imagine Sophie Dupont is one of them, but I have never counted how many times she actually breathes during her Marking Breath performances.
The first time she presented Marking Breath in public as an artwork, a performance, was in 2011. From dawn to dusk she sits or stands, perfectly calm, inside or outside in a public space and breathes. Every time she breathes she makes a mark. The first time directly on the wall, later on materials like zinc in New York, copper in Mexico City, silver in Voss, and gold in Rio. Her choice of material always relates to the place the work unfolds, just as the only other parameter, the duration of the work, reflects when the sun rises and when it goes down again. It is a stringent yet gentle cyclical framework. Who knows exactly when the sun goes down? When the performance is complete, all that remains is this document, a two-dimensional surface, metal or leather, on which the marks have been made. On the one hand there is the banal and implicit fact that what we see is a registration of what all of us do as long as we are alive: inspiration and expiration. On the other hand, given that Sophie Dupont focuses on process and notation, it is a classical performance work, a work that extends in time and demands concentration as well as physical and mental preparation by the performer.
Which is how it is with many of the best art performances; they are simple, focused and demand a high degree of stamina. Like Marina Abramović and Ulay’s 22 performances entitled Nightsea Crossing (1981-87), which consisted of the two artists sitting motionless for days from morning to night in chairs opposite each other looking into each other’s eyes. In other performances, Sophie Dupont has involved exhibition visitors, for example by having them place or remove weights on or from her body until it either lifted or sank. A slow and poetic visualisation of something we constantly do mentally.
The word inspiration comes from the Latin inspiratio, a derivative of the verb inspirare. As well as the act of breathing and thereby being infused by fresh oxygen, the word also means receiving an intellectual or creative infusion. To be inspired is to experience something coming from outside of oneself as an unexpected gift. Since antiquity, artists have been seen as an instrument for the divine. The artist does not necessarily have to understand her own work, she is merely the mediator infused by something she gives artistic form.

In Marking Breath, one of the performances in Sophie Dupont’s exhibition at Overgaden, she focuses on pure being: that as well as being a body, we are a constant, pulsating rhythm. And she invites the visitor to participate. To sit opposite her and breathe with the same rhythm. It is, in all its intimacy and generosity, a transgressive experience. When are we so close to another human being that we breathe with the same rhythm?
Each marked breathing plate is also a countdown. One day there will be no more marks to make. That our biological life draws to a close is something Sophie Dupont deals with in several of her works. Count Down 2010-2062 is a watch that counts down to the fictional time of the artist’s death, estimated to be at 7.30am on October 8th, 2062. In Watching the Night, first performed in 2015, the artist digs a grave that she then lies in overnight. Again, a very simple action – to dig a hole in the earth and lie in it looking at the night sky with open eyes. A ritual and reflection on the fact that our physical existence also changes. A work like this can be seen as part of a tradition represented by artists like Cuban-born Ana Mendieta (1948-1985), whose series Siluetas (initiated in 1974) consists of images of the artist’s body lying on the ground, or of impressions left by her body in the landscape. Unlike common cultural perceptions of the grave as cold and barren, Sophie Dupont, like Ana Mendieta, works with the earth as something we return to as part of a different, more cyclical view of life.
Sophie Dupont draws inspiration from numerous sources. She is originally a dancer, and is interested in Eastern philosophy, as well as human concepts of spirituality. The work 28 Tongues, for example, refers to a tantric drawing from 17th century Rajasthan in which monks have made simple, brightly coloured symbolic drawings to meditate on – works that seen with contemporary Western eyes could just as well be modernist paintings. In her performances she has often worked with masks, costumes and body extensions that are also inspired by the Bauhaus avant-garde, who were similarly engaged with spirituality.
At Overgaden the more introvert part of the exhibition represented by the breathing works are in the back room. Between them and the second section is a row of geometrical iron forms on the floor. Triangles, circles, squares. Some of them three-dimensional, all of them with dimensions that give them a volume equivalent to the density of the body of the artist.
These classical, geometric forms recur in Sophie Dupont’s new, large carousel work, which has given the exhibition its title: This Will Also Change. The work is a large, jangling iron carousel, 3 metres in diameter. The central figure is an open frame constructed with the three basic geometric shapes of triangle, square and circle. Lower body, torso and head. This is also the still point of the turning carousel. In addition to the figure at the centre, there are five ‘horses’ or figures that can potentially be ridden based on five states or feelings: love, anger, desire, fear and joy.
Love clearly refers to Rodin’s classical sculpture The Kiss. Anger has three heads, fork hands and a circle in its solar plexus, where squeezing tension can be sensed. The top is crowned with a spiral with four tongues, another circular movement that also refers back to the Kali symbol in 28 Tongues. Kali is the destroyer, but seen as a positive force capable of breaking down rigid positions. Desire points in all directions, an erect penis and a nylon-stocking breast – a tribute to the British artist Sarah Lucas. Joy has an iconic, golden halo and a glass hand that seizes the day, whilst anger is a spiky mask that does not allow anyone to get close. The circle of the carousel is associated with celebration, with theatre and masks – the carnivalesque. The carousel has an embodied duality: it is created to seduce, sparkle, shine and play alluring music, but is also just a piece of cheap machinery.
The carousel is also a turning circle, pointing again to the cyclical nature of life where everything moves, returns. The circle is a universal symbol of entirety and eternity. It is the perfect figure of the divine, and to be found in all religions. The cosmic wheel, the mandala, can at several levels be seen as a unifying symbol of the works of Sophie Dupont. The mandala usually has both squares and triangles inscribed within the circle. Certain mandalas are a meditation tool, a complex symbolic system that is meditated on through countless repetition. In Tibetan sand paintings, for example, the mandala is the result of a concrete meditative practice.
With her carousel, Sophie Dupont points to the fact that we are not our feelings, but that our feelings are states that succeed each other in an endless chain of action and reaction – and that we can move in and out of them. In our current emotionally centred culture we seem inclined to equate feelings with the self. But it is possible to take a break from the carousel of feelings and climb into the still point in the centre. To breathe. Inspiration and expiration.
Text by Mai Misfeldt; Critic at Kristeligt Dagblad and Kunsten.nu. 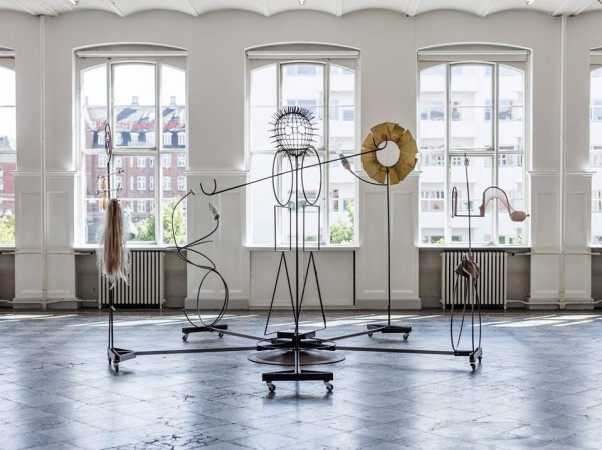 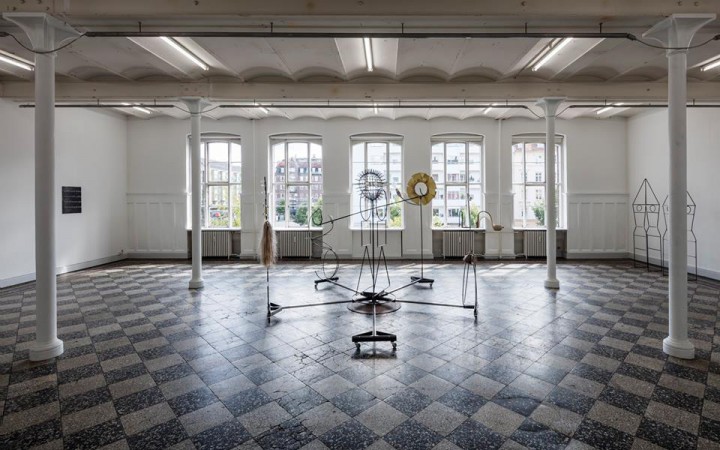 Sophie Dupont’s exhibition “Reflections” unfolds though three components – photography, object and body. As in several previous works Sophie Dupont connects and reflects the three components in each other and reveals how they are intertwined, not only with each other but also with the viewer: The image of the body and the image of the object is integrated and reflected in the physical body and the physical object.
Sophie Dupont works with performance, sculpture and photography, but disregarding media the starting point for her works is often an existential and poetic reflection on the basic human conditions and on the basic elements and mechanisms of both body and mind.
Dupont’s poetic and existential focus also often reflects in her works’ formal minimalism and choice of materials, which are often in dialogue with the body and mind – either symbolically or directly.
Recurring themes in Sophie Dupont are simple rituals and repetitions. Through those she examines the contradictions and connections between object and subject; body and psyche and her past performances have thus been quiet poetic studies of respiration, body weight, balance and movement. 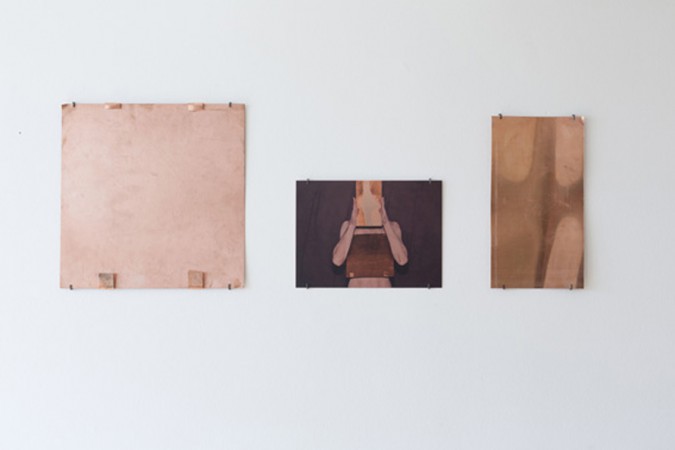 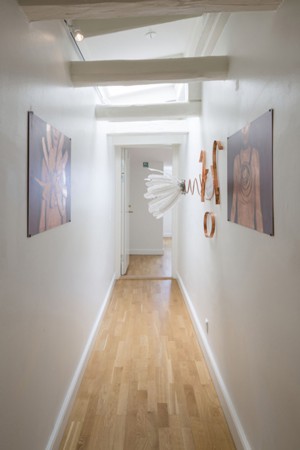